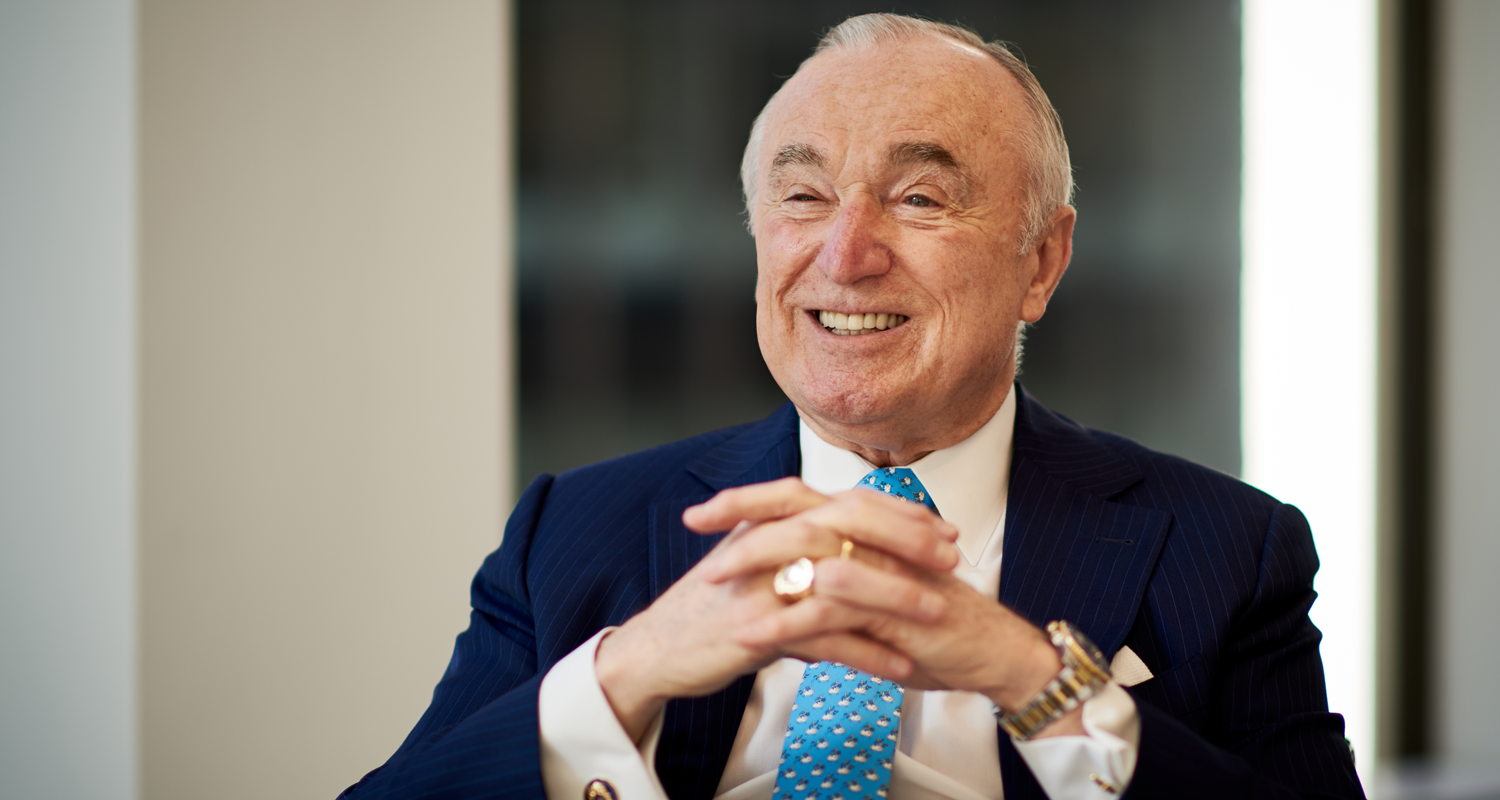 As stadia become more sophisticated, complex and connected, serving as more than just venues for passive enjoyment of sporting events, how, too, do security needs evolve? Here, in this long tail to the Issue 03 “Cities” focus, excerpts from a conversation with Commissioner William J Bratton, chairman of Teneo Risk and former head of the Los Angeles and New York City Police Departments, on stadium safety and security in the 21st century.

A lot of stadium venues now encourage you to, effectively, log on. The stadium provides you with information that’s tracking the sporting event. There’s the constant messaging in the form of pop-up ads and other techniques. There are no limits in many respects. On the one hand, from a security perspective, there’s the increasing ability to identify who’s in the stadium; on the other, from a privacy standpoint, you’re giving your life away. Users and attendees need to think about who operates the stadium and where it is. In some foreign venues, for example, we recommend using dumb phones or travel-only smartphones with limited connectivity to your personal information—or your company’s.

There’s also the idea of being able to disrupt an event through a cyber attack — the potential to shut down an electrical system, for example, or interrupt or interfere with ticket sales or produce counterfeit sales.

The role of security isn’t just the idea of the guard at the gate anymore or the perimeter fence. It really has to take into account the idea that you’re facing the technology that the average fan is bringing into the facility.

There’s a growing concern around drones, with open-air stadiums and the large crowds that congregate before entering an arena. It’s increasingly possible to weaponize drones—literally, using a drone to drop a device or bomb—the urgency of which was exhibited in the recent years in Syria and Iraq with ISIS. Drones also accelerated our need for artificial intelligence. You can imagine trying to defend against 100, 150 small drones with AI capabilities, like watching birds in the sky, how quickly they move around. How do you defend against that?

To show how quickly that field is evolving, as recently as two years ago I looked at a company using falcons to come in and scoop a drone. Another used drones that would drop a net on top of another drone, then pull it away. Increasingly, the technology is the idea of basically putting up a defensive electronic barrier around the location—effectively, put up an invisible wall around a facility. Once a drone approaches, it hits and goes down or gets pushed back. Three to five years ago that did not exist. Fortunately, there’s a lot of people working in these areas, both the government and private sector.

As much as possible, the idea is to make security less intrusive. The idea of being able to scan people walking into a stadium for certain types of walk or gait that might detect carrying a weapon. The technology is constantly improving to both ensure the flow and the speed but also the accuracy of what we’re able to detect.

Dogs play a big role here. Initially, they were guard dogs. Then came bomb detection dogs, who in many respects are now being replaced by vapor wake dogs—dogs that don’t have to be pointed at a box or a device but just walk up and down the line of people going into an event. I was introduced to a dog the other day whose specialty is identifying computer chips. So, when they search a house, and somebody is hiding the little chip for the phone, that dog—don’t ask me how he does it—can find the chip [hidden] in a book.

Stadium designers, for their part, take into the account the egress flow of people so event-goers can get out of a facility very quickly. We saw in the bombing outside the stadium in Manchester [at an Ariana Grande concert], how people attempted to get out of the stadium even though the event was occurring outside, jumping over the railings, etc. So a lot of thinking that’s going into the design of stadiums involves the access of fans to the stadium and also the egress because we’ve had attacks on both those going in and those coming out.

“The role of security isn’t just the idea of the guard at the gate anymore or the perimeter fence. It really has to take into account the idea that you’re facing the technology that the average fan is bringing into the facility.”

Camera technology today is phenomenal, and it’s constantly getting better. We work with Verizon, who has put a great deal of effort into Super Bowl in Minneapolis, as they do many events where there is going to be a surge of people. Everybody now has a smartphone, and they want to make sure they have the capacity to handle that surge in usage. They have what they call ‘small cells’ that mounted on light poles in areas where there were going to be surges of people, then set up their own separate command center to make sure they could meet the surges that they were measuring.

You can see how that becomes a significant part of security. Basically, if there’s a surge of activity that was measured by the cell phone activity increasing, cameras could be activated. What if there’s a fight or a disturbance going on in the early morning? That’s where drones would be helpful as well, mounted with fixed cameras that use the small cells.

We need to think in concentric circles. The first one is intelligence, the idea of constantly scanning. Are there any threats being directed? What’s going on on social media? Are there specific threats against a team? Against a member of the team? What’s going on in that particular community that might not have anything to do with that event but they’re going to basically target the event because of all the cameras? Next layer is understanding that the security isn’t just at the gate or the entrance. It has to be farther out. Then, there’s having redundancy in systems: if one system goes down, there’s another to take its place. Redundancy is a very big thing in the planning of the event itself, if not in the design and construction of stadiums.

Collaboration is essential, too. In this respect, command centers have evolved significantly. The command center concept is all about collaboration. At Super Bowl, for example, there was the public safety command center with all the various agencies, public and private, involved with monitoring capabilities. And it’s a national event, so the FBI and others are all there as well.

The idea of collaboration with certain countries is more difficult than it might be with other countries. Each country has its own set of concerns. Russia, for example, would have concerns with terrorism as it has experienced with Chechnian issues, with its dealing with Ukraine, with ISIS in Syria, and within Russia itself. The collaborative sharing of intelligence and information is a little more problematic at this time in the world with some of the entities that would have to be involved. But with most sporting events, there’s a level of wanting to have a shared experience and no country wants to have anything happen in a negative way. So, it tends to, I think, encourage more collaboration.

When the concept of ‘See Something, Say Something’ first came out many years ago, people didn’t pay much attention. Increasingly though, it’s become a way of life. The idea of fan involvement is to keep them aware and unafraid. We don’t want to take away from the experience. Fans want to be with the crowd. I think the entertainment and sports world will show that people still desire to be in large numbers to enjoy events. You want them to be able to enjoy the event, but you also want them to be aware.

—Excerpted from a conversation with Noah Davis.

This story appears online only.