Today a thrumming tech and creative community, Playa Vista (a stone’s throw from Los Angeles International Airport) was once the heart of the country’s aircraft design and manufacturing sector, which boomed in the 1930s and flourished through postwar before tapering off in the decades to follow. Until the mid-’90s, when they were abandoned and left to languish, 72andSunny’s two Bauhaus-style buildings, built in 1941, were the executive and R+D offices of Hughes Aircraft Company, namesake of the industrialist and birthplace of the legendary ‘Spruce Goose’ H-4 Hercules (not to mention, many years later, the technology that made stealth flight possible). In 2007, the four founding partners of the California-born, global creative firm saw in the dormant structures the opportunity to write their own chapter of the LA industry-and-innovation story. As a walkabout of the idyllic Hercules Campus (as it’s now known) reveals, not only did they go the distance to create an environment where ideas and ingenuity could once again take root and thrive, they took care to preserve the Hughes legacy and make it part of their own. What’s more: soccer and surfing, not to mention civic and social conscientiousness, run deep in the identity and culture. —SS

— the square footage per person (concluded after some experimentation) prime for creativity, according to 72andSunny founding partner and global creative co-chair John Boiler, who, with Lean Arch’s James Meyer, spearheaded the design of the agency’s Hercules Campus and buildings (dubbed ‘Hercules 1’ and ‘Hercules 2’). Above, scenes from a day in the life at 72andSunny LA, where interiors awash in natural light (thanks in part to expansive banks of windows on each building’s sides) connect the two-storey spaces to their natural surroundings, bring to life an uncanny attention to detail and décor (including use of original fixtures and furnishings), and foster openness, energy and interaction. While breakout spaces abound, there are no personal offices — a tenet of the agency’s collaboration principle.

The agency pitch (so to speak), smack in the middle of 72andSunny’s backyard. In 2015, the agency picked up the Adidas global sports account without review, rolling out the first of its soccer-focused creative that fall. In late 2016, CEO and partner Matt Jarvis, avowed advocate for the sport in the US, debuted Electric Futsal, an annual five-a-side tournament and fundraiser held at the Venice Beach basketball courts. 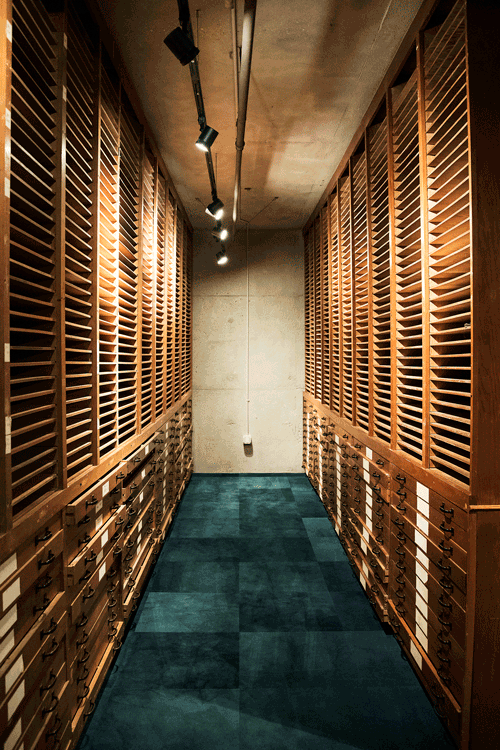 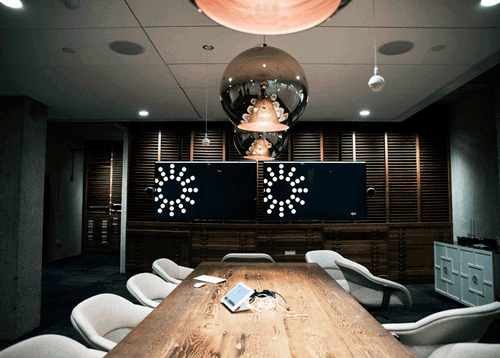 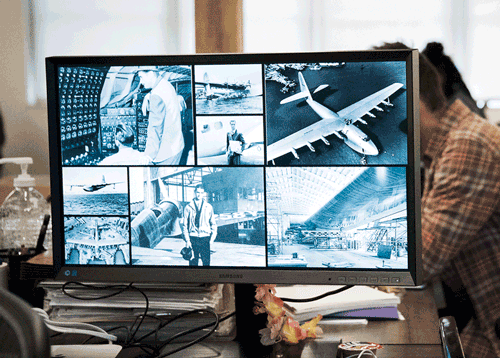 The Hughes Aircraft vault and archives — where well-preserved blueprints and other original artifacts were discovered during renovation — remain intact and in use, in Hercules 2, as a conference area. Below left, a staffer’s screen defaults to vintage stills recovered from the archives. 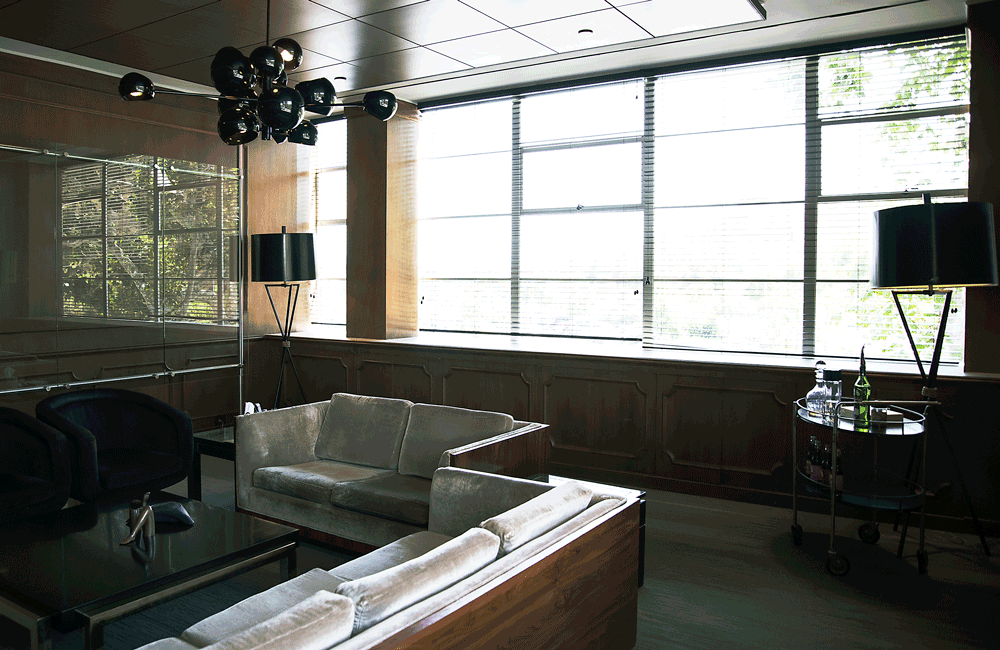 The original mahogany paneling adorns the communal meeting space, southeast corner of Hercules 1, that was once Howard Hughes’ executive office. At the left (but not shown) is one in a system of interior doors said to have been installed by Hughes to avoid using the main corridor in getting from one office to the next. 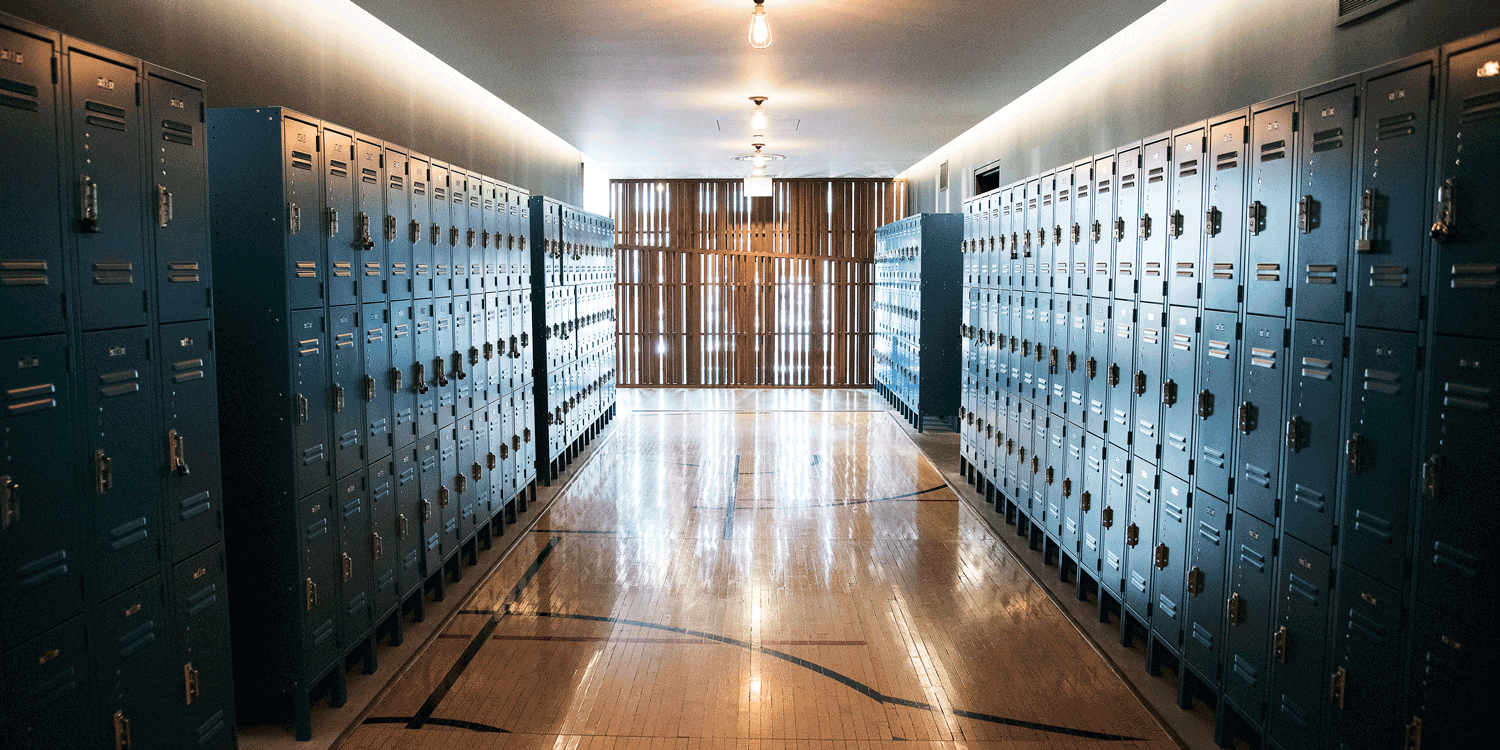 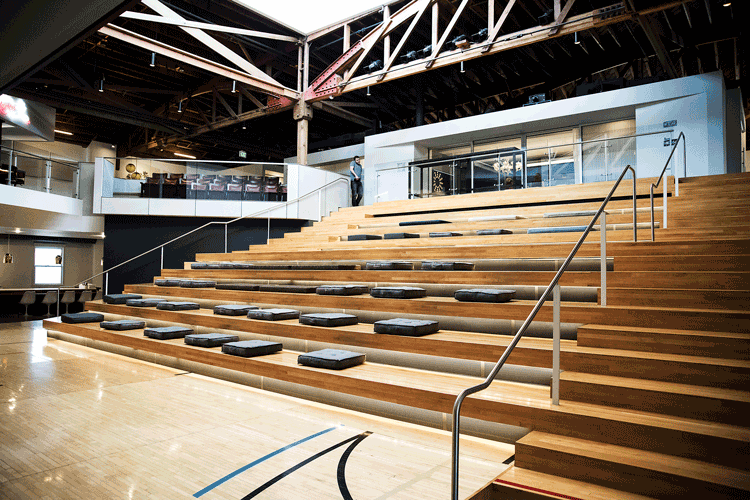 Conference rooms and breakout spaces named for local surf haunts (‘Rincon,’ ‘Swami’s,’ ‘Mavericks’) and a main boardroom table silhouetted, appropriately, like a surfboard, testify to a reverence for Southern California surf culture, which the agency considers a close cousin, from a design standpoint, to the area’s aviation boom of the ’30s. A reverence for Bruins basketball lore, namely the legacy of coach John Wooden, is also manifest; flooring from UCLA’s Pauley Pavilion court, where Wooden coached his team to a record seven straight NCAA titles, decks the auditorium in Hercules 2 (left), while in Hercules 1, the long desk shared by the partners (below) is custom-made of the same reclaimed maple boards. 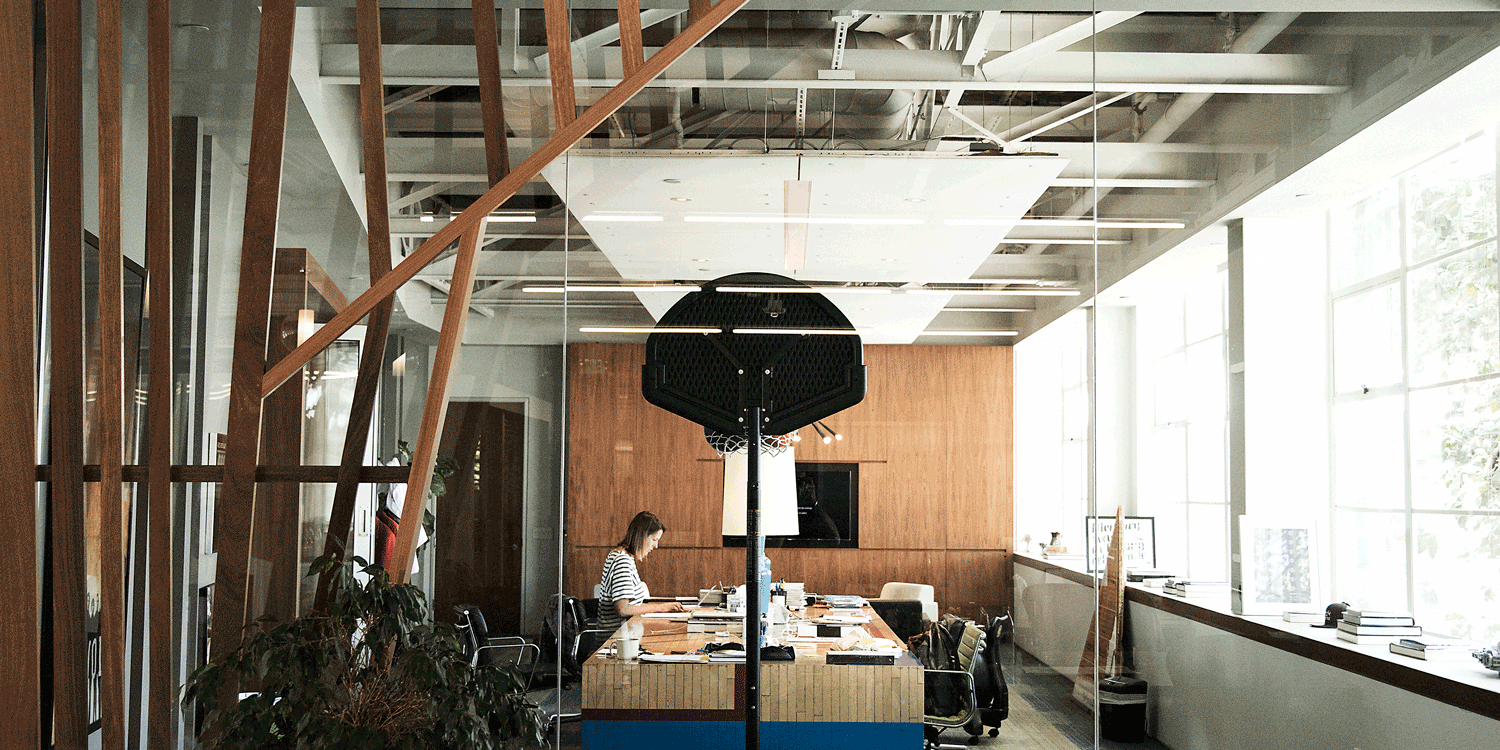 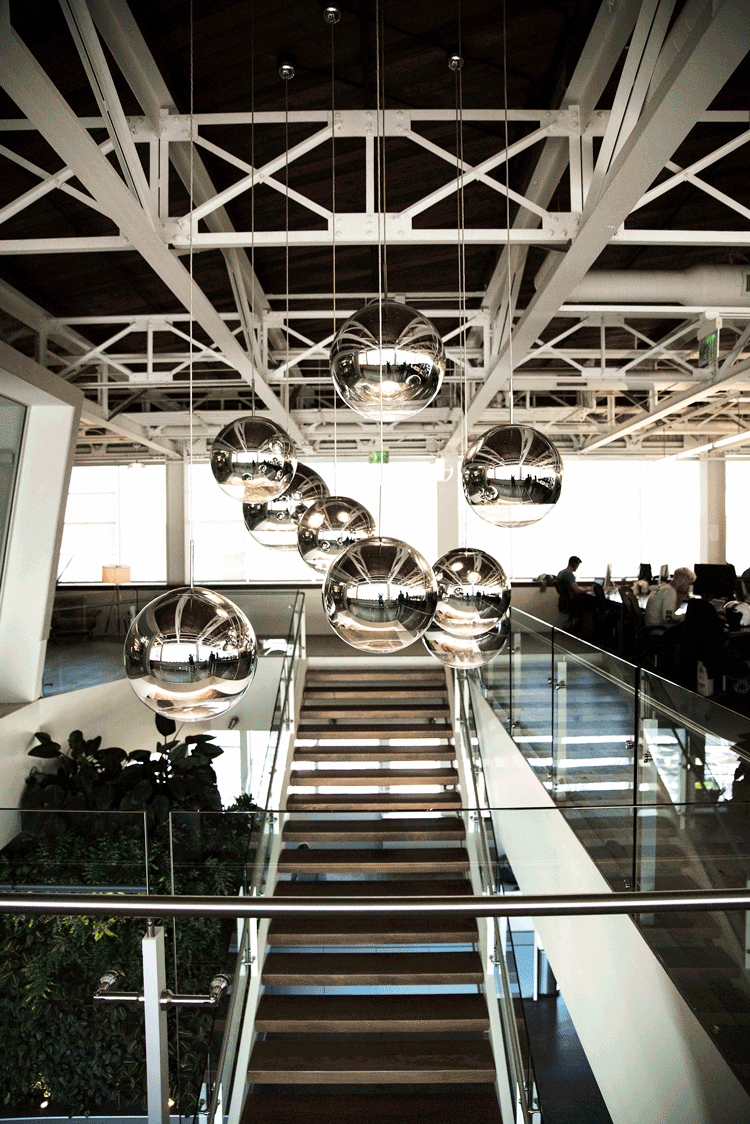 Works by Jim Riswold, Charles and Ray Eames, Vernor Panton and Chaz Bojorquez are among the original art and design pieces found throughout the offices.

We have the chance to create seismic change in how people see the river. 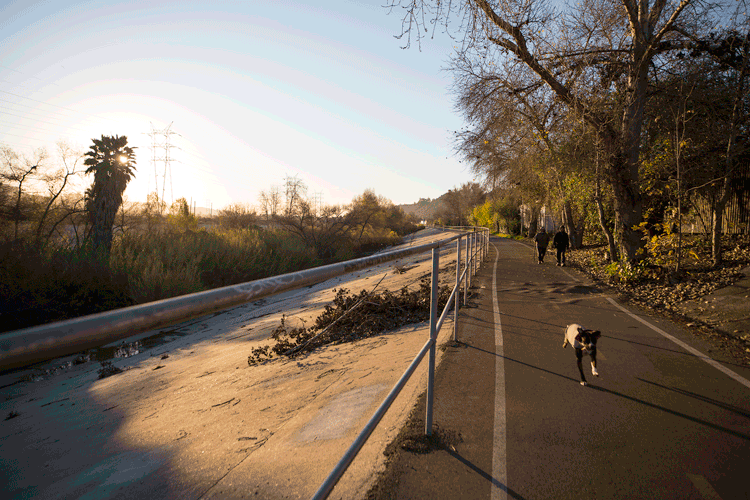 A formidable list of projects with the city it calls home meshes with a civic- and social-mindedness hardwired into the agency ethic — a core value turned client proposition in 2015, when it launched the global Brand Citizenship practice under the leadership of former Surfrider Foundation CEO Jim Moriarty. River LA is one such undertaking, the agency working in partnership with the nonprofit and alongside its coalition of stakeholders (including architect Frank Gehry) in the effort to revitalize the 51-mile Los Angeles River as a shared public space that serves a variety of civic, recreational and environmental imperatives.

The partnership has included a collaboration with 72andSunny’s in-house creative residency, 72U, on a public-engagement and advocacy event and giving DaVinci charter school students (as part of a long-term partnership between the agency and the academy) the chance to develop their visions for the river in their communities. Keeping the story buoyant by seizing and creating opportunities to get the word out is mission critical, says Kelly Schoeffel, who leads the River LA work for the agency. With a key aspect of the revitalization on the horizon for 2020, look for more from the agency in the months to come.

Right: Logos created by 72andSunny for River LA and LA2024(28). Pictured above: a section of the LA River Greenway. 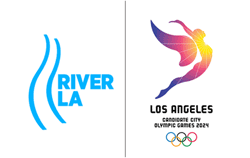